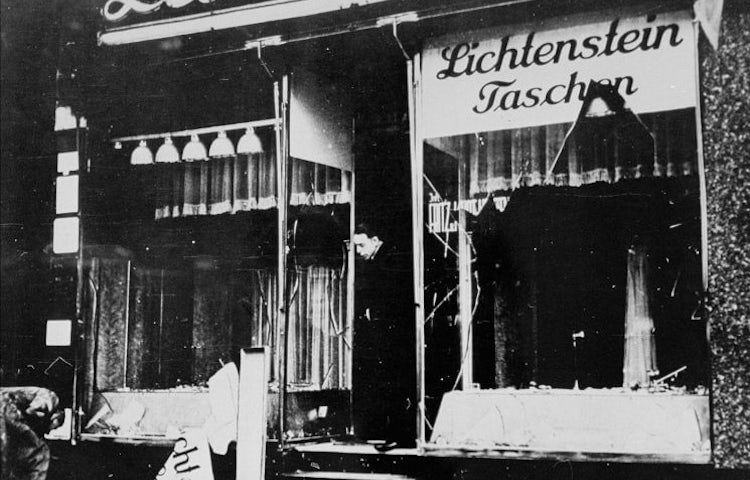 Kristallnacht, often referred to as the “Night of the Broken Glass” due to the shattering of windows in shops and synagogues, is the euphemistic term coined by the Nazis to refer to a massive anti-Jewish pogrom perpetrated throughout Germany, Austria, and the German-occupied Sudetenland region of Czechoslovakia on November 9 and 10, 1938.

On the eve of November 9, 1938, police stood idly by as members of the SA and Hitler Youth took to the streets throughout the Reich. In the ensuing violence, 267 synagogues were burned and destroyed, Jewish businesses were looted, and their windows smashed, Jewish schools, homes and hospitals were desecrated.

The reason given by Nazi propaganda was the assassination in Paris of a junior diplomat by a Jewish teenager whose family had been deported from Germany and abandoned by the Polish and German governments in the border town of Zbaszyn.

After Kristallnacht, police rounded up 30,000 Jewish men and placed them in concentration camps. After they were released, applications to leave Germany increased, though few applications for foreign visas were successful.

Widely considered to be the turning point leading to Nazi Germany’s escalation of anti-Jewish policies and sentiment, the events failed to lead to any significant action from Allied governments against the Nazis, nor did it spur the acceptance of Jewish refugees by other countries. In the summer of 1939, the refugees aboard the MS St Louis were refused entry to the United States, Canada and Cuba.

MS St Louis: a German ocean liner which left Hamburg for Cuba in May 1939, with 900 passengers seeking refuge from Nazi persecution. The ship was refused permission to disembark in Cuba, the United States and Canada, eventually returning to Europe in June. Most of the refugees were offered asylum in France, Belgium and the Netherlands: historians estimate that most of those aboard were eventually killed in Auschwitz after the invasions of these countries.

SA: in German, Sturmabteilung (Storm Troopers). The paramilitary wing of the NSDAP, attracting its membership from working-class, unemployed veterans, the SA earned a justified reputation for violence and thuggishness in the 1920s and 1930s. During the 1920s, they provided security for party meetings and rallies, as well as “collecting” contributions to party funds. Following the seizure of power in 1933, the leadership of the SA pushed for more aggressive implementation of the Nazi programme, in particular expressing a desire to take over the Army. To gain the support of the Army, Hitler ordered the arrest and murder of the SA leaders in June-July 1934, in the so-called Night of the Long Knives. Following this, the SA was relegated to a very minor role in the Nazi state.

Hitler Youth: in German, Hitlerjugend. A youth association for teenagers, the Hitler Youth, and its counterpart The League of German Maidens, became compulsory for all German youth in 1936. In addition to ideological indoctrination, activities were highly gendered, with boys focusing on skills which trained them for military service, and girls being trained to be wives and mothers. Historians disagree about the degree to which the Hitler Youth was successful in indoctrinating German youth: although some former members such as Melita Maschmann have written about the degree to which they subscribed until very late to Nazi ideology, other sources suggest that attendance at youth movements was resented by some young people.