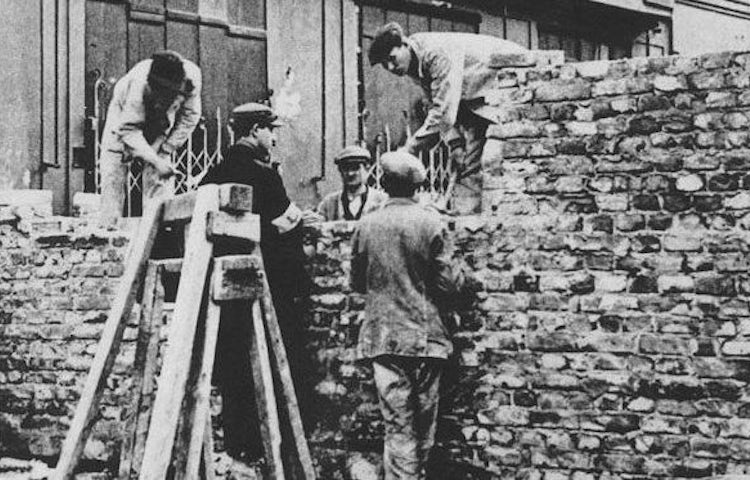 Not all Jews were forced to live in ghettos during the Holocaust. Most ghettos were established in Nazi-occupied Central and Eastern Europe. Some Jews escaped from the ghettos and lived in hiding, or used their “Aryan” appearance to live on false papers in the wider population. Others were hidden in religious institutions, schools or elsewhere. Finally, some Jews survived in the forests of eastern Europe as partisans.

In Western Europe, Jews were generally rounded up from their homes into transit camps where they awaited deportation to killing centers. Until then, they often remained in their homes or, like Anne Frank and her family, lived in hiding, supported by non-Jews willing to help.

In addition, however, the Einsatzgruppen which followed the Wehrmacht into the Soviet Union in June 1941, killed around 2 million Jews between 1941 and 1944. They also oversaw, encouraged and at times directed pogroms by the local populations.

For these victims, the Holocaust happened in their home towns: often rounded up in the main square and then marched to an execution site. There are hundreds of such sites in the fields and forests of present-day Poland, Lithuania, Ukraine and Belarus, many of them forgotten.

Wehrmacht: the name given by Hitler to the unified armed forces of Germany after 1935, including the Heer (army), Luftwaffe (air force) and Kriegsmarine (navy).

Pogrom: spontaneous anti-Jewish violence by the non-Jewish population of a city, town or village. A notable pre-Holocaust pogrom occurred in Kishinev (in present-day Moldova) in 1903 but many occured in other towns and villages in Eastern Europe, especially in the pre-WW1 Russian Empire. In the medieval period, however, pogroms occurred across Europe, for example in York in England in 1190.

Aryan: Nazi ideology had as its central belief that an ethnically pure German – or Aryan – race had been polluted by foreign elements, most notably Jewish and Slavic. Nazi propaganda and education idealised blond hair, blue eyes and physical strength; as well as demonising Jews and others as sexual predators.