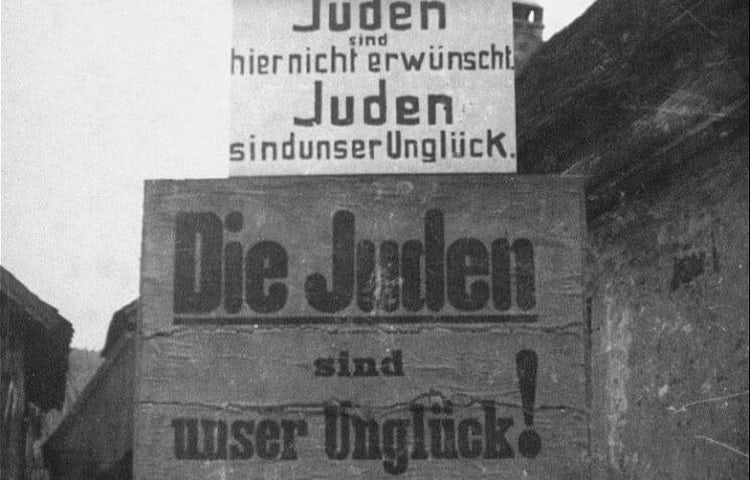 A sign posted in front of a fence that reads, “Jews are not wanted here. Jews are our misfortune.” (circa 1935). Photo credit: United States Holocaust Memorial Museum, courtesy of Unknown Source

Hitler and the Nazis were rabid anti-Semites who falsely claimed that German Jews had betrayed Germany during World War I and were responsible for its defeat. The Nazi ideology was also based on a racist ideology whose goal was the elimination of Jews and other undesirable groups from German society. The Nazis also held Jews responsible for Germany’s economic misery during the depression of the late 1920s and early 1930s.

The hatred of Jews has a long history in European society. Pogroms and expulsions marred the history of almost every country in Europe in the middle ages and even in the modern era. This was based on the depiction of Jews as “Christ-killers” by Christian authorities and the persistence of antisemitic stereotypes in art and literature. During the nineteenth century, religious Jew-hatred combined with beliefs about racial difference and superiority that focused on “blood” rather than belief to produce modern antisemitism.

Why and how this idea was endorsed by German society has been the subject of debate. Some scholars have argued that the Nazis were an expression of a particularly German form of antisemitism and was the basis of their appeal. Others have argued that Germans became antisemitic after the Nazis took power and took control of education, broadcasting and the media.

Antisemitism: hatred of Jews. Efforts to define this remain controversial but the definition and examples devised by the *International Holocaust Remembrance Alliance* are widely used by governments and other organisations.